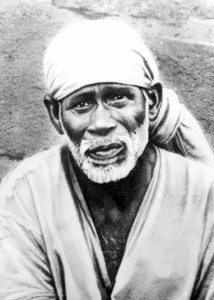 Baba's life was one of unity. He lived to unite the different castes and creeds together as one family and unite every person with God. He saw no difference between one religion and another, saying often, “Subka Malik Ek,” “One God governs all.”

The villagers of Shirdi were unaware of the Divine Play taking place as a young, nameless fakir sat under a neem tree on the outskirts of town.  Villagers were surprised to see someone so young practicing such hard penances.  He had no love for perishable things and self-realization was his sole concern.  This saintly boy left Shirdi for four years, his whereabouts unknown.  Then, he returned to Shirdi as part of  a wedding procession.  Upon seeing the fakir, a local Khamdoba priest greeted him, as if divinely inspired, saying “Ya Sai” or “Welcome, Sai.”  He never left Shirdi after that and was now known as Sai Baba.

An older woman from the village felt such immense love for Sai that she took to him as his mother walking miles into the jungle carrying a basket of food to offer Baba.  She often found him under a tree in deep meditation, calm and serene.  She would approach her new son boldly as a mother would and serve the food.  What would seem to be out of compassion for this woman, Baba moved into a dilapidated mosque in the outskirts of the village.  He named this mosque “Dwarkamai.”

Baba’s external appearance was of a simple man, illiterate, moody, and often emphatic – sometimes fiery and abusive and at other times full of compassion and love.  He wore a long shirt and tied a cloth around his head, and twisted it into a flowing plait like manner behind his left ear.  He used a piece of sackcloth for this seat and slept on it with a brick as his pillow.  He begged for alms and shared what he got with everyone around him, even the animals nearby.  Any money received would be handed out to the poor, sick, and needy the very day it was given to him.  He used this simple demeanor and facade as a means to veil his real identity as God Incarnate.

Like many great saints before him, Sai left no written record, but sought to teach his devotees by his actions.  To this day, devotees read the life of Baba in order delve deep into the spiritual treasury and pull out priceless gems.

Baba’s life was one of unity.  He lived to unite the different castes and creeds together as one family and unite every person with God.  He saw no difference between one religion and another, saying often, “Subka Malik Ek,” “One God governs all.”  To demonstrate this to the villagers of Shirdi, he often recited both Hindu and Muslim prayers, such as the Vishnu Sahasranama, the Thousand Names of Lord Vishnu, and Al-Fatiha, the first chapter of the Quran.

Along with promoting unity among people, Baba stressed the importance of charity saying “If any men or creatures come to you, do not discourteously drive them away, but receive them well and treat them with due respect.  Shri Hari (God) will be certainly pleased if  you give water to the thirsty, bread to the hungry, clothes to the naked and your veranda to strangers for sitting and resting.”

1. Whosoever puts their feet on Shirdi soil, their sufferings will come to an end.
2. The wretched and miserable will rise to joy and happiness as soon as they climb the steps of the mosque.
3. I shall be ever active and vigorous even after leaving this earthly body.
4. My tomb shall bless and speak to the needs of my devotees.
5. I shall be active and vigorous even from my tomb.
6. My mortal remains will speak from my tomb.
7. I am ever living to help and guide all who come to me, who surrender to me and who seek refuge in me.
8. If you look to me, I look to you.
9. If you cast your burden on me, I shall surely bear it.
10. If you seek my advice and help, it shall be given to you at once.
11. There shall be no want in the house of my devotees.

Though he never left the small village of Shirdi, Baba’s wisdom and compassion has spread throughout the world, drawing devotees from every creed, culture, and ethnicity.  His life continues to inspire millions of people to help others, seek liberation, and attain oneness with God.

Shirdi Sai Baba Temples continue to spring up all over the world, due to the demand of devotees who love his message of unity.